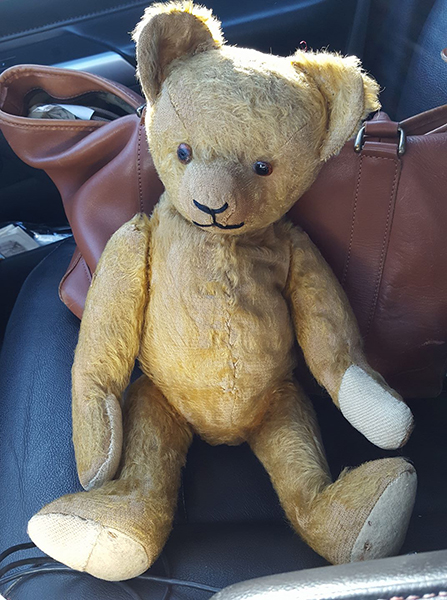 Can you still find good old bears for a reasonable price?

It appears the answer is yes – if you are in the right place at the right time. People always seem to put big prices on old bears around here even if they have no idea what kind of bear it is.  But, you still can find the odd vendor who doesn’t usually deal in old mohair teddy bears and views old toys in less than pristine condition as having low value.  I think the secret in bear hunting is to visit antique  and vintage shops frequently.
My daughter was in town and we went shopping on a Friday. I was thinking it was too bad I wouldn’t be able to find a fun bear. They are scarce around here. Imagine my surprise when I found this fellow at Found Things.
The vendor, a nice lady,  had just put him out.  She was surprised that I had swooped in on the bear which had been her childhood companion. She was downsizing and finally decided to see if anyone would want him. The price tag was $25. She looked a little dubious when I read the tag like she regretted setting the price so low, but said she was happy he was going to a collector. I thanked her and sped up to the front desk to claim my prize.
He has some issues, but, don’t we all. His mohair is sparse, but in good condition – no dry rot! His pads have been covered with a woven fabric and the visible felt has some moth holes. His nose and mouth seem to have been re-stitched at some point and his muzzle could probably use some extra stuffing. His joints are working fine. One eye is a bit cloudy. Cataracts?
I am guessing he is an American bear. From the looks of his former owner, he was probably made in the late 1940s . He’s 20 inches tall with a high, wide forehead that gives him a baby-like expression.
I was thrilled, especially when I could hear other shoppers asking about him when he was at the front desk waiting for me to finish shopping. (Dec 2017)