In a nod to my love of all things Christmas, I have been making needle-felted Santas and reindeer every year. This year’s collection had make-do Santas mounted on various antique industrial spools. In the past, my Santas have pretty much all carried a teddy bear – obviously. But this year, I wanted to change it up a bit. I found a couple of lots of antique putz stick-leg horses that were affordable enough to include in my pieces without making them outrageously expensive. I have been collecting the spools for a few years, as artists do, trying to amass a group that I could use for something.

I was a bit stymied by a bunch of flat spools that I got from Sandee Millet at Greenwood Merchantile in Greenwood, MO. I knew they would be good bases for figures, but wasn’t sure how I would use them. It took me several months of back-burner ruminating, but I finally figured it out. I needed a tiny figure!

These little guys were well-received and I will be making more for next year. The flat spools are not as readily available as some of the other styles, so I will be on the hunt for more!

I did not have time to make any Santa bears, so I will work on those for next Christmas also. I have the one polar bear started and I think he will just be carrying a tiny Santa doll of his own.

0
SHARES
FacebookTwitterSubscribe
I went to one of my favorite stores – Home Goods – to shop for a few Christmas gifts and it turned out to be a bear hunt! Right inside the door, I found a huge – 6 ft? – FAO Schwartz teddy bear sitting in a large decorative sleigh. You never know what you will find at Home Goods. I am not sure about this size of teddy bear. Where would you put it? Would it scare a child? Should you buckle it’s seat belt on your way home from the store? I did not buy it, but I did decide to look for more bears. Just around the corner and down the aisle, I found this big polar bear. There were a couple of them around the store. Again, I didn’t know where I would put a bear so large or store it in the off season. But, when I went back a week later, both the giant bear and this bear were gone. Some people had a beary happy holiday! The last really cute bears I saw were on this table runner. I brought this home with me. I figured I could use it all winter and the three bears were just so happy looking! So that was my bear hunt at Home Goods. You never know where you will find bears. Who doesn’t love them?
0
SHARES
FacebookTwitterSubscribe

Since I was mixing it up in the family room, I boldly had my husband set up the big Christmas tree by the front window in the living room. We haven’t put this tree up in years and I was thrilled to be able to enjoy it. Sometimes we get busy and just run out of time to get everything out every year. I had been making do with the white tree full of Steiff ornaments in the family room, but I really missed my treasured ornaments that go on the big tree.

The ornament that thrills me the most is this blown glass polar bear head. It was made in Poland by Slavic Treasures. They make incredible ornaments. I found this one years and years ago at Tuesday Morning. I remember looking in all of the boxes at the store because nothing was actually displayed out of the box. When I opened this one, it took my breath away. It’s as big as my hand.

If I could have found more, I would have bought more, but this was the only one they had. Of course, by the time things make it to Tuesday Morning, they are at least last year’s stock, so I never found another. I wish I had one for back-up. I have carefully wired this to the tree so there is no chance of it falling and I even set it back from the edge of the branches so it would have some cushion if the tree actually toppled over.  I am so careful with it that I pay attention to the placement of furniture and rugs around it, calculating the risk if anything should happen. Okay, I am obsessed with this ornament.

Another treasured ornament is this star I made when I my children were little. I took a wallet-sized print of the three of them together and ma

de the star from some scraps of dance costumes I was making for a studio at the time. (Yes, I used to take in sewing!)

an old quilt for my tree skirt because Rowdy loves to sleep under the Christmas tree. Even though it has been a few years since this tree has been up, he remembered and went right under for a nap! Here he is “helping” me decorate!

The dogs are really good about not disturbing the tree. On the other hand, I loaned a tree to my son, and his two kittens have already destroyed it! They have knocked it over trying to climb it and batted the ornaments right off! I’m glad I chose to loan him unbreakable ornaments for those silly boys!

The big tree is happily shining in the front window this year. Bruce put the lights on a timer so they come on right before I get home in the evening and turn off after I go to bed. Then, they turn on in the morning when I get up and off when I leave for work. So nice to have the Christmas cheer of a tree in the window! 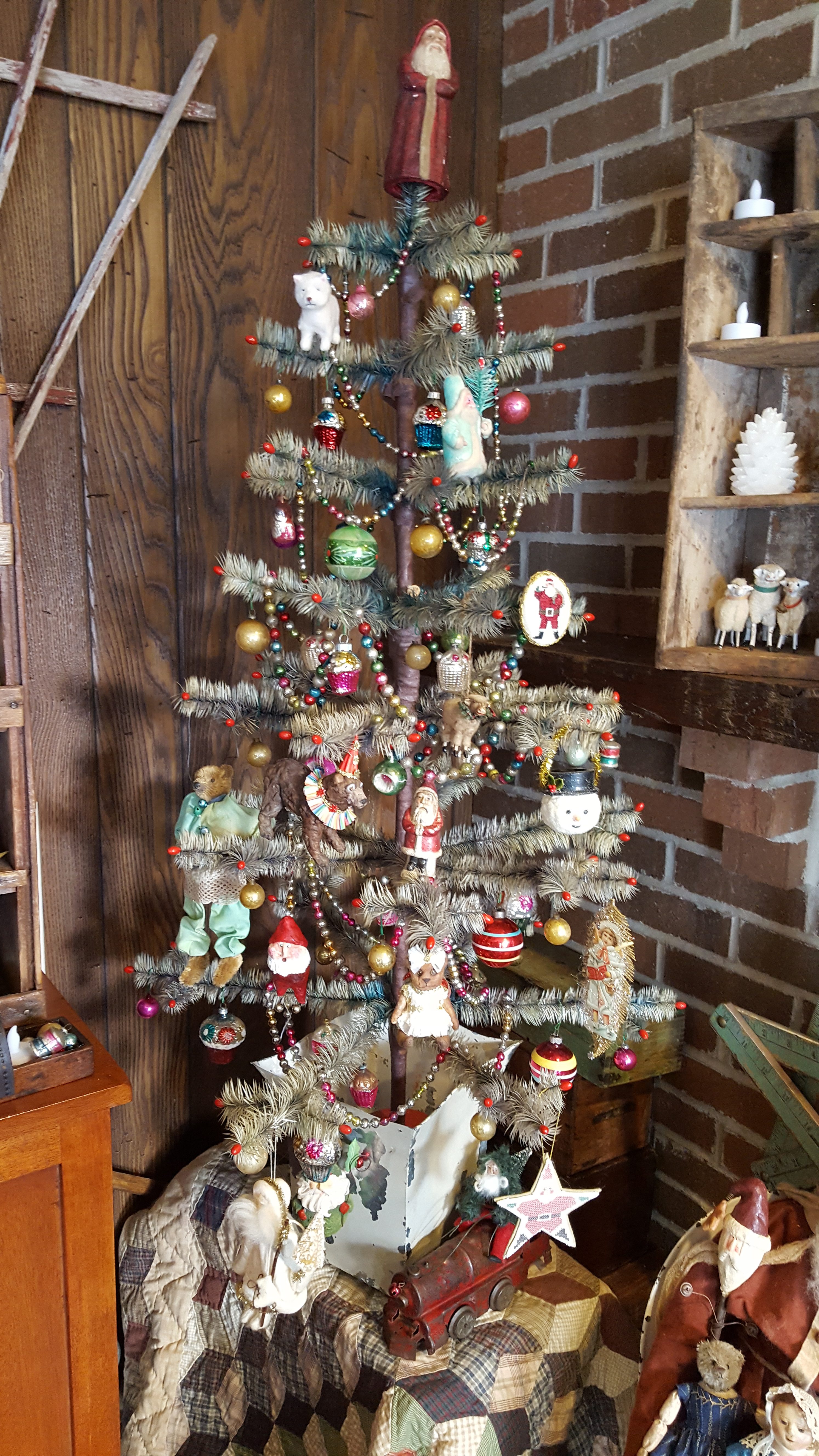 I haven’t done counted cross-stitch embroidery for many years due to a problem with my wrists and not being able to see where the stitches go anymore. My vision has been improving lately, and my hands aren’t as bad as they used to be, either, so I decided to try a small project. I discovered that I can do it as long as I don’t work too long in a session. I made this little pillow tuck using a pattern from a magazine and altering it a bit. It kind of set the tone for the family room display.

I mixed it up a bit this year. Usually I have a tall skinny white tree in the corner by the fireplace that displays my collection of Steiff Christmas ornaments. Alas, the Steiff ornaments never made it out of their baskets, but maybe next year I will figure out a place for the white tree.

all feather tree which had somehow had the trunk broken and had been out of commission for awhile.  I started to paint my picture with that. I love feather trees and have since I used to play with the one in my Grandma and Grandpa Tanner’s attic. Mostly I have reproductions, but they are artist-made, as I like!

I placed the tree in a chippy white galvanized jardiniere that I purchased from Joe Carter at Broad Street Market in Story City, IA several years ago. I had been using it to hide the plastic pot of my amaryllis each year at the office, but it was flaking off all over and I decided it needed to go home!

I chose a quilt with a primitive palette to cover some small trunks for elevating the feather tree. This coordinated with the big sitting Arnett’s Santa who took up residence on a little off-white metal stool. I love these little stools with the curved backs for supporting teddy bears and cloth dolls. This one was a purchase from The Picker Knows.

I started decorating my feather tree with only spun cotton ornaments. I added two this year – a Westie and a little girl bear from Trish Lewsader of Lucky Duck Art. Still I didn’t have enough. So I added a candy container bear by Terri Larson, some cross-stitch ornaments I had made years ago, papier mache ornament by Janny Miller and some vintage mercury glass balls.

An old cubby piece that I got years ago from the Rusty Pumpkin and you have seen me use before came out of hiding and I filled some of the spaces with German stick-legged putz sheep. A favorite feather tree design pillow tuck filled one cubby and I used LED candles in others. A small green feather tree, some books, and an LED candle in a silver bowl topped the cubbies. Since I had used red bound copies of Hitty and A Child’s Garden of Verses, I included a little bisque jointed doll. Like Hitty was at times, she is naked.

I brought out my mercury glass bead garlands and used those to dress up the cubbies also, allowing them to flow out over the edges. The multicolored ones were used on the big feather tree.

More of the sheep flock and assorted candles inhabited another set of cubbies on the mantel beside a large Santa by Christy Robb that was a new addition this year.

The Stockings Were Hung

Instead of cloth stockings, I hung a group of wooden stocking stretchers that I collected from an estate sale. The Arnett’s Santa is holding three little dolls: A dollie bear by Joel Hoy, an Izannah repro by Judi Hunziker, and a Robert Raikes Hitty.

Finally, on the mantel, I used my chippy white medicine cabinet to display my little 1940’s Japanese Santas. I hung a red berry candle ring wreath on the knob and a red prim bear by Judy Mathis stands guard. The grungy electric candle that I bought on a trip to Winterset, IA has a built-in timer! Best candle innovation ever! I set them to burn 5 hours in the evenings and they have lasted for months without a battery change. 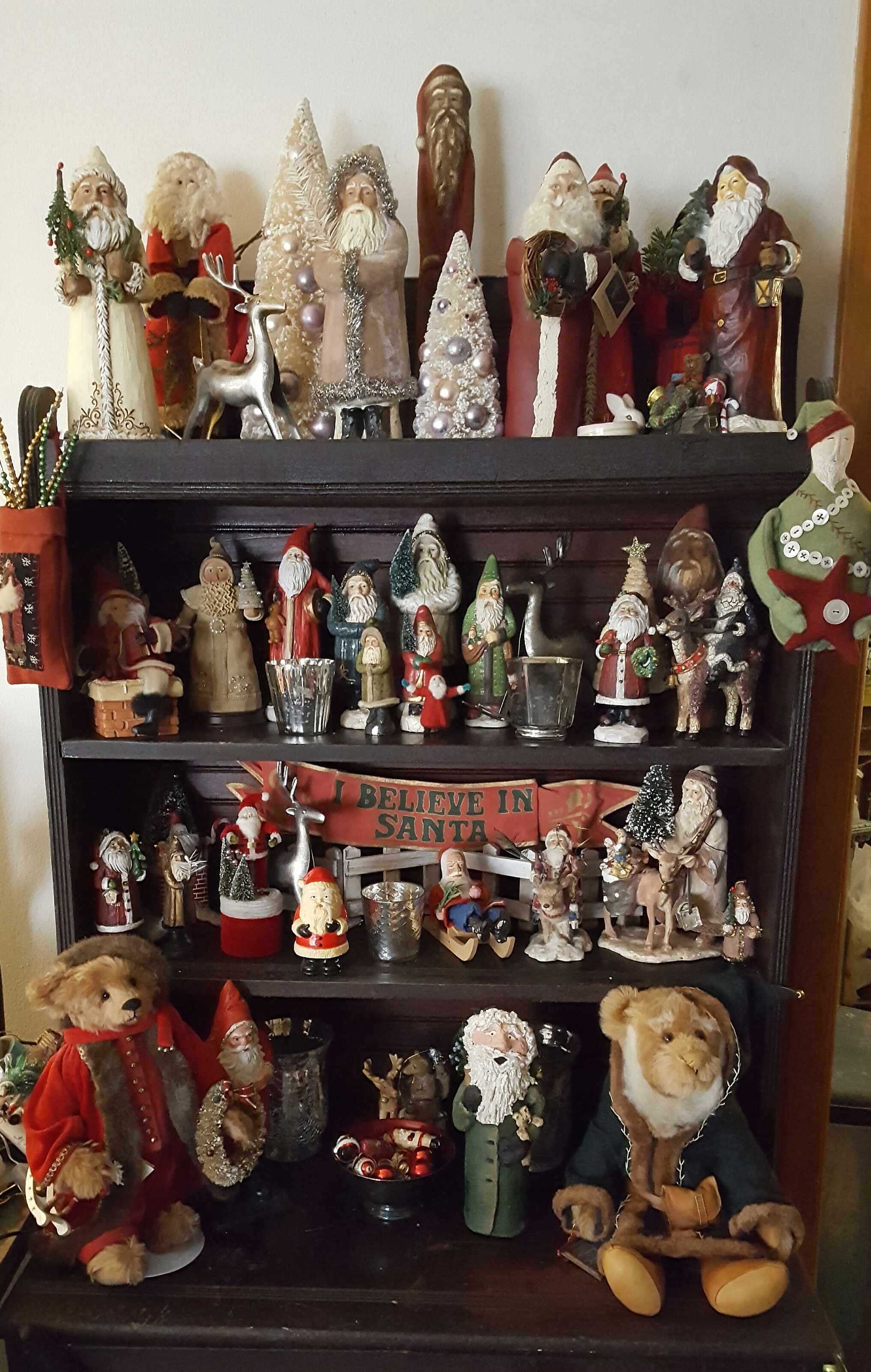 I have shown you my beloved funky little cabinet that I got at Found Things a few years back. Recently, I placed it by the door to the kitchen – directly in your line of sight when you come in the front door. Then I filled it with most of my collection of Santa Clauses.

Sometimes it’s good to display a collection en masse. One glorious overload of the jolly old elf! And it hits you as soon as you walk in our front door! It exudes Christmas cheer and invites you to stop and examine the pieces closely – one delightful depiction after another!

Santa is the Spirit of Christmas Giving

The spirit of Christmas is strong at our house. Santa, Father Christmas, St. Nichlolas, or whatever you call him is the spirit of Christmas giving.  I have been collecting Santas for a long time. In this display, you’ll find manufactured pieces and artist pieces side by side. I love them all. Artists represented include Joel Hoy, Janny Miller, June Wildash, Ruth Hare, Edna Bossert, and Nan Wright.